HAMDEN, CT – The Yale Bulldogs defeated the Quinnipiac Bobcats for the second time in 2018, using two power play goals from Jordan Chancellor for the margin of victory plus 24 blocked shots, and 40 saves from Gianna Meloni to shut out their rivals. This included fending off over two minutes of QU having an extra attacker advantage late in the third.

Quinnipiac launched 80 shots total, with half of them ending up on net, the 24 blocks took care of most, but the Bobcats also managed to send 15 off target, many times from right in front of the net in a baffling display for the talented team.

Yale had only two power plays in the game but they scored on both of them. Relatively early in the second, Chancellor got the puck right in front of Abbie Ives and flicked it over the netminder’s right shoulder. Assists went to Emma Vlasic and Julia Yetman. 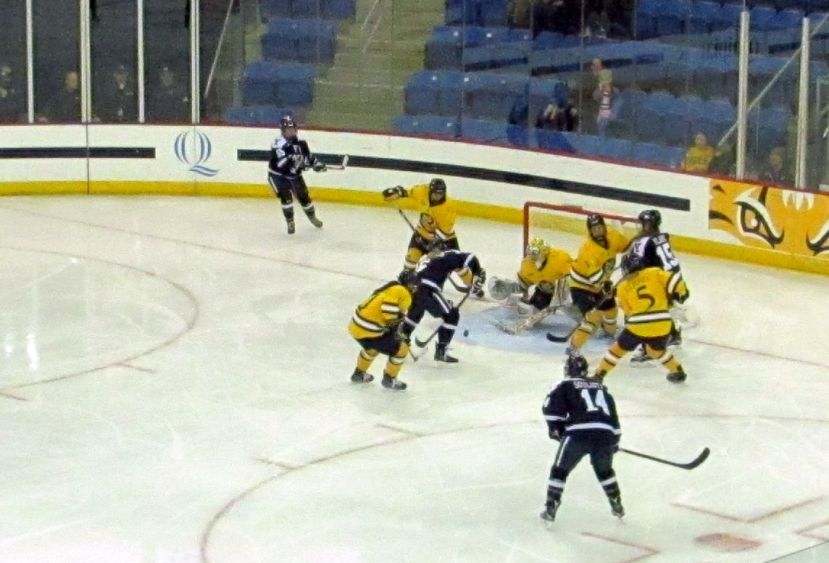 The second time, Yale had nearly killed off a penalty when the Bobcats picked up their own. After a brief four on four, the Elis gained the advantage and Chancellor swept into the QU zone, weaved and zagged and sent it into a small gap to the left of Ives at 12:15. Saroya Tinker and Meloni picked up assists on the tally.

Quinnipiac’s shots came from a lot of places. Sarah-Eve Coutu-Godbout looked due throughout the game and sent 7 shots on net, Kenzie Lancaster had 6, and Melissa Samoskevich had 5. All seemed to be on the verge at various points. Randi Marcon also put up 5 shots, Raquel Pennoyer had 4, and a variety of others had several. For Yale, Chancellor’s 3 shots on goal, 2 with success, led her team and the others were spread throughout the Bulldog lineup as the Bulldogs only put up 15 shots on net on the day.

Yale’s Mallory Souliotis, a Boston Pride draft pick, had 8 blocked shots (two of which came with QU having the 6 on 5 advantage). Julia Yetman and Saroya Tinker had 3 each, Courtney Pensavalle had 2, and Kirsten Nergaard, Lauren Moriyama, Kaitlin Gately, and Grace Wickens each had 1, with the rest being team blocks.

Yale killed off the three penalties they had drawn effectively. Meloni had to make several key saves during those periods as well. At even strength she thwarted one of the most serious attempts QU made when Lancaster blocked a Yale shot out of her zone and broke in towards the net followed by Samoskevich whom she fed it to, only to have it thwarted by the keeper. At the tail end of the game the Bobcats generated a ton of opportunities with the skater advantage but Meloni again was a rock.

Quinnipiac did have the services again of Kilponen who returned from Team Finland preparations, and gave the Bobcats a full compliment of defenders for the first time in awhile. She also resumed her critical role on the power play setting plays up and launching hard shots in on net.

Yale survived some early mistakes as they turned over the puck several times in their zone in the first giving their opponent’s some opportunities. They were able to escape any damage though and play tightened up as the game went on.

Ives only made 13 saves, and gave up no even strength goals, and both power play goals came from prime position for Yale including Chancellor’s breakaway for the second one. This makes the third straight game in which Ives has held the opponent’s scores down, though the team has only managed one win of the three.

For Yale, Skarzynski had a wide variety of zone entries, and players like Courtney Pensavalle and Chancellor had several. Defensively, Skarzynski had a large number of zone exits, and the team overall contributed to move the puck out as Yetman, Tinker, Sophie Veronneau, Grace Wickens, Kaitlin Gately, Vlasic, Souliotis, Moriyama, Chancellor, Emily Monaghan, Laura Anderson, and Kara Drexler were all noted getting the puck away from danger. Gately also took it end to end twice.

In addition to shots themselves, Samoskevich, Markey, Prater, Coutu-Godbout, and Marcon had several zone entries. Kilponen had few registered shots on net but a large amount of attempts. Tabin also kept the puck in the zone numerous times, as did Shannon Cherpak. Samoskevich as is her custom also collected the puck a lot in the Yale end already for scoring chances.

Defensively, Samoskevich, Lundblad, Coutu-Godbout, and Lancaster continued to generate zone exits as well as entries. Marcon also extricated the puck from the goal area to stop a Yale effort. As a whole the six defenders worked well to shut down a lot of Yale chances so the forwards could move the puck out and up speedily.

Coach Turner spoke about the positives she saw from the team and the ongoing struggle to finish, as well as Anna Kilponen’s contributions upon her return.

These are plays that are noticed during game play. They are not exhaustive. A lot are missed. It ‘s just what is seen. Read any of these as “at least” rather than “total”.Rather than write these out I am providing the raw notes. (A scoring chance doesn’t necessarily generate a shot. I only list the same scoring chance once in a player’s section.)

Key: (If you see one of these letters under a column it means the following.)