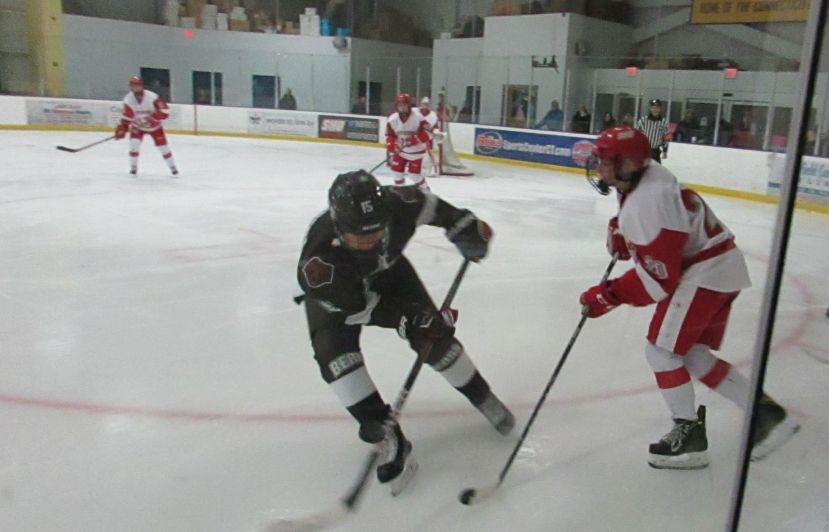 SHELTON, CT – In a rare meeting between the Brown Bears and Sacred Heart Pioneers Friday night, the Bears took the first of the two game match up 3-1. Despite some late Brown penalties and a resurgent SHU attack in the third period, the game would end up in favor of the visitors.

SHU Head Coach Thomas O’Malley was encouraged by the performance though.

“I thought we had a great effort, real real strong effort,” O’Malley said. “Brown capitalized on some of our mistakes and scored a few nice goals. We had chances, we just didn’t finish them. We had a real nice goal scored by Taylor Moreland, but we had other opportunities that we could of buried, and unfortunately we didn’t, but overall A for effort. Really happy with the effort that the team brought tonight.”

Moreland’s goal came at 18:56 in the second with Sacred Heart trailing by three. She turned the tables on a Brown power play by breaking up ice eluding her pursuers and knocking it past Lauren Rippy of the Bears for her eighteenth goal of the year. Moreland had been very active on offensive throughout the game.

Brown had gotten on the board first when Sena Hanson had shot it past SHU’s Sarah Erban at 6;28 in the first, assisted by Samantha Swanstrom. Hanson would strike again at 4:16 in the second as she gained the zone and shot it quickly while still on the move into the net. About 4 minutes later, Sam Donovan (A Connecticut Whale draft pick) took it down the ice at high speed and swept across the front of the net sending it in for the three goal lead, assisted by Cara Najjar.

SHU had several power play segments in the third period, including after a miscue landed a Brown player in the box for too many skaters on the ice just as another of their penalties was ending. Despite this the Pioneers couldn’t light the lamp. Several other chances were generated especially in the third as it looked like Sacred Heart was on the verge of netting points numerous time, but the opportunities weren’t finished or were thwarted by Rippy. The Brown netminder who was very steady in net for the throughout the game despite some furious chances on her doorstep. Rippy fended off several Sacred Heart breakaways and the Pioneers also crashed the net multiple times, but she dealt with every single instance.

In looking to Saturday’s rematch O’Malley had noted the need to finish and also mentioned the power play which had come up 0-7 on the day. “Our power play, which we practice every single day, needs to be effective, and it has been,” Coach O’Malley said.

Hanson led Brown with 8 shots, as Cynthia Kyin, and Abby Nearis had 4 apiece. Brown overall had put 31 shots on net and Erban had saved 28 of them. SHU generated 29 shots, which Rippy made 28 saves on. Katie Stueve had 6 shots to lead all Pioneers, Moreland had 5, Meghan Kebalka, and Maddie Bishop had 4 each. Moreland, Olivia Bryant, and Stueve each had breakaways. Haley Payne and Bishop were some of the many SHU players to get acquire the puck right in front of Rippy for a solid chance. Smith had a chance on net even with multiple Brown defenders on her at the time.

Coach O’Malley was hesitant to single out specific players for praise noting “overall, everyone came to play tonight.” He was complimentary of Moreland, and her fellow Captain. Brittany Smith, as well as the team’s first line but also noted Maddie Bishop from the third line played well as did her line. Jordan Sanislo, a Freshman defender, was also complimented on her play. SHU’s defense had to deal with a fast Brown offense who generated a lot of chances and kept the puck in the Pioneers zone for long stretches at times.

Najjar had 4 of Brown’s eight blocks (including several on the penalty kill), as Maddie Sisokin had 2, Katie Swanstrom had 1, and Bridget Carey had 1. SHU’s Jayne Lewis had 2 blocked shots, and Lilly Cleary, Moreland, Savannah Hersey, and Brittany Mingoia all had 1 apiece. Moreland’s came with the net empty late in the game to prevent Brown from delivering a dagger. SHU’s Payne was noted for outracing a Brown player to prevent icing at one point.

Brown, despite being an ECAC foe, did not bring a style of play unfamiliar to SHU.

“They’re comparable to a Holy Cross and a Saint Anselm,” O’Malley explained. “We played them strong and played them tight…tonight was a speed game for both teams, it was a know-how game, it was a hands game, a skill game. We’d love to play that type of team every single night.”

Given the team’s performance O’Malley was optimistic heading in Saturday. “This team has played some big games this year, and we know we can beat a team like Brown. We’ll be ready for them tomorrow.”

(More information to be added as time allows.)

These are plays that are noticed during game play. They are not exhaustive. A lot are missed it. It just what is seen. Read any of these as “at least” rather than “total”.Rather than write these out I am providing the raw notes. (A key is below the images.) There just is not enough time to do the write up, but if this is useful to anyone please view. Note as always these are noticed plays, not a comprehensive list, as sometimes writing down one play causes me to miss another and so on.

(Note: It’s not user friendly. I haven’t figured out how to get it to pop out larger. You can download the image to see it larger.)

Note goals are rarely noted as they are already part of the game score sheet. Also a scoring chance is only noted once for each player. So if it’s under N it’s not under A and so on.

ZA-…Leading to a scoring chance.

ZTA-…Leading to a team scoring chance.

DT-…and started puck out of zone.

DO-…skated puck out of zone.

DS-…sent puck out of zone.