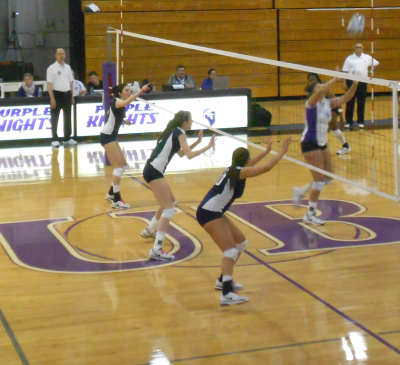 BRIDGEPORT, CT- The Owls of Southern Connecticut State University did not have to travel far to find a tough opponent in the rival school that is the University of Bridgeport. The out of conference match up came on a Tuesday night in the rainy port city and was a close one. The Purple Knights narrowly took set 1 25-22, then once again edged the visitors 25-23 in set 2. Set 3 looked to continue that trend of close sets until a late scoring run put the set and game away 25-15.

The two sides were tied at 16 in set 1 but UB built a lead thanks to a Darsel Springer spike down, an ace from Taylor McBeth, a Sabrina Simas kill punched to the back corner of the SCSU zone, and an Owl attack error. With UB up by 4, Southern’s Kimberly Lachowicz looked to make a set to a teammate but instead sent the ball over the net surprising the knights. She and Olivia Lathrop then shared a block that sent the ball hard into the opposing zone to cut their deficit to 2. Springer responded hammering the ball through and off the blockers in front of her. Despite good defensive saves by Jade Black and Lachowicz of the Owls, UB got the lead back to four when Ying Shen’s cross court spike skimmed a defender’s hands on the way out of play. Lathrop’s response was to hit the ball over the Bridgeport front line on the ensuing volley back forth, and in a long sequence where each side kept the ball alive, Lauren McVey eventually struck with a Spike for the visitors to cut the lead yet again. UB’s time out stopped play, but McVey’s huge kill down the line cut the lead to 1. Shen stopped the bleeding with a block, only to have the ball go into the net on the next point. Biljana Savic regained the momentum by whacking an attack off the Owl front line, and Southern attacked into the net following that to end the set.

Set 2 featured Southern eventually reaching a 15 to 12 lead only to find the set tied at 17. After that, Shen’s spike was not returned effectively by the Owls, but UB spiked a ball out of bounds as well to keep the score tied. The Purple Knights picked up another kill, and then a second when Savic ricocheted the ball off a defender and far out of bounds. SCSU spiked into the net after that, and Savic spiked again with effect to make the lead 4. Southern however responded immediately with a point, and then Black came up with another. UB spiked into the net themselves, and following a time out, SCSU’s Sarah Beres put the ball over the net and the defense couldn’t set up a return to tie the match. Bridgeport stopped the run with a point, and Springer launched a kill cross court. Black’s kill off the block attempt cut the lead again, but an SCSU attack error put UB at 25 points.

Set 3 opened with each team scoring 10 points suggesting another barn burner. UB’s Martina Santia however helped put an end to that when she slashed the ball through the the blockers for a point, another would follow off a SCSU attack error, and then Santia would land a serve in front the Owl defenders for an Ace. Lachowicz interrupted the run with her kill that popped off a defender’s dig to the floor, but another SCSU attack error put the team back down 3. Savic blasted the ball over as well, though the dance between the two teams continued as Bridgeport served into the net, picked up another kill immediately after, and then served into the net again. After another attack went out of bounds Southern was back within 2. Springer unloaded a big spike to regain the three point lead, and then Shen delivered two straight kills including a cross court blast through the front of the Southern defense. SCSU’s next attack would go awry, and the lead was 6 points for the Knights just like that. Lachowicz whapped the ball kabonking it off a blocker and sending it soaring out of bounds. The lead was cut to 5 but UB had another kill, then Shen crushed two successive spikes hard with the same result each time, a point for the purple and white. Southern would be unable to return a serve from Michele Santos, and an attack error after that sealed the game and match in a very exciting contest.

Statistically, Shen not only picked up kills at critical times, she had 16 overall, and .389 kill percentage. Savic’s 14 kills and .257 kill percentage were not far behind. Springer had 6, and Santia and Sabrina Simas had 4 as only 6 UB players had kills at all in the match. Fernanda Silva notched 40 assists and the libero Taylor McBeth had 22 digs, though Shen had 13 as well. Shen and Larissa Oliveira each had a solo block, Springer shared 2, one with Santia, and one with Sofija Markovic. Santos had 2 of the team’s 6 service aces.

For SCSU, Black had 10 kills and .156 kill percentage, McVey had 7 and a .174 percentage. Beres scored 6 and Lachowicz and Lathrop each had 4. Lachowicz also picked up 29 assists. Black had 20 digs, Beres 12, Morgan Carman and libero Vanessa Sullivan had 10 a piece. SCSU had 7 blocks on the day, and Lathrop took part in 5 including the team’s only solo block. Lachowicz shared 3, Syriah Celestine and Black each took part in 2 as well. Carman had 2 of the team’s 3 service aces.

SCSU’s now 19-8, and UB has a 16-4 record, though neither team saw their conference standings change in the out of conference clash.