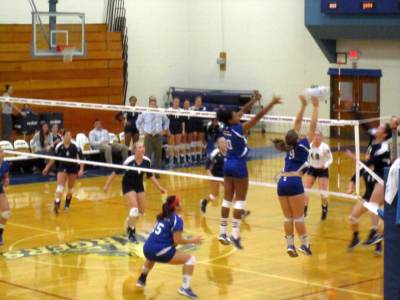 WEST HAVEN, CT- The Golden Lions of Dowling came into Charger Gymnasium to take on the University of New Haven and despite their efforts were unable to give the home team their second loss of the season. The two teams clashed Friday night in a non conference clash.

The Chargers took a big lead in Set 1 putting the Lions down 10 early on their way to a 25-12 win in the set. The set ended with UNH on a four to zero run as well, punctuated by Kristy Atufunwa and Ashley Dalton’s block.

Set 2 went differently as the two teams reached a 10-10 tie. Dowling jumped ahead with four straight points thanks to some UNH errors, Kiarra Majors and Cassy Kelly’s block, and Bethany Shepard’s service ace off the defenders and out of play. New Haven however reversed the course of the set with eight straight points to take a 18-14 lead. Kaulana Ane started the run when she battled an opponent at the net and knocked it in, Kea-Marie Olaso’s serve resulted in a miscue on the return by Dowling, Ane and Atufunwa shared a block which actually sent the ball into the back gap of the visitor’s defense. Keidy Candelaria than struck tying the game, but she wasn’t done adding a block, and another kill which ricocheted off a Lion and under the net. A Dowling attack error and Ane picked up another point when her attack caused an opponent to dive but with no effect. Kelly stopped the bleeding for Dowling with a cross court spike she placed just within the out of bounds line, but the damage was done. Atufunwa took a set and launched a rocket through all the defenders, and followed it up hacking the ball off the blocking line and straight out of bounds to the right.

The Golden Lions did pick up three more points to bring the score to 21-18, but they would not score again. Candelaria bonked an attack off the blockers. She followed this by diving to keep the ball in play with a desperate dig, the ball flew over and landed just within the lines without being touched by the defenders pleasantly surprising the Chargers. Two points later, she also ended the set by serving the ball for an ace when a Dowling player sent a ball into the net instead of over it.

Down 2 sets to 0, Dowling needed to rebound, but New Haven didn’t let them. The two teams were tied at 14 but 3 attack errors and an Amber Cannady and Dalton block put New Haven up 18-14. Dowling did not fade though and Kelly broke the run with a cross court missile. Cannady responded whapping an attack off the blockers. Following that Dowling benefited from a UNH attack error, thanks in part to Kayla Morgan keeping the ball in play with a great dig while sitting. New Haven scored again when Lee spiked off the blockers and into a middle gap. Kelly responded with a blast through the UNH front line. Her teammate Shepard had another kill, though each side traded points until Shepard’s kill tied the set at 22.

Majors and Franki Dove then put UNH’s sweep in doubt with a block for a 23 to 22 lead. Dowling attacked into the net on the ensuing play returning the serve to New Haven. Candelaria stepped back and served the ball. Two defenders made an attempt but it couldn’t be set back. The ace placed New Haven up 24-23 and in position to win, and that’s just what they did when an errant Golden Lions pass sailed over the net and Atufunwa smashed it back across to end set and match.

Statistically Cannady led UNH with 10 kills, Candelaria had 9, Atufunwa 7, and Lee and Ane 6. Cannady also put up a .500 kill percentage and Lee a .308. Ane had 30 assists in addition to her offensive points. Candelaria had 3 of the team’s 5 service aces. The team had their digs spread out amidst multiple players. Cannady had four blocks including 3 solos. Atufunwa and Dalton each shared two.

For Dowling, Kelly led the team with 11 kills and a .261 kill percentage and Shepard had 9 kills. Mirjana Radovanovic had 15 assists, and Kayla Dillman had 13. Morgan Mutranowski had 2 of the team’s 3 service aces. The team also had their digs spread out among many players. Majors and Shepard both took part in 3 blocks, 1 solo each.