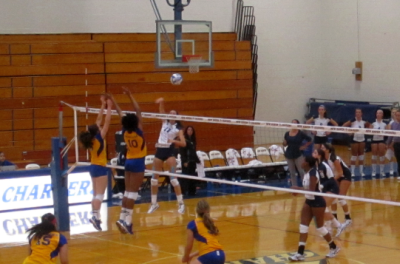 WEST HAVEN, CT- In a Northeast 10 Conference clash, the Southern Connecticut Owls made the short trip up the road to take on the New Haven Chargers. UNH however fended off the Owls in three straight sets though not without a major fight from the blue and white.

Set 1 was a relatively back and forth contest early as the teams reached a 9-9 tie. New Haven however then struck with a 7 to 1 run giving themselves a commanding position. The Owls would give chase but the set would eventually wrap up with an even bigger lead for UNH, 25-17.

Set 2 opened with the Chargers going on a 6 to 1 run putting the visitors in trouble quickly. The yellow and blue held onto that advantage for awhile though Southern fought back to within 3 and hung close until the late stages of the set when two successive Charge kills ended the set 25-20.

Set 3 also started auspiciously for the Chargers as they were up 7 to 3 early, but the Owls swept back to a 10-10 tie keeping things interesting. New Haven responded with a 9 to zero scoring run to put the game out of reach even with the Chargers giving up 4 points late with attack and service errors. They would eventually wrap up set and match 25-16.

Kristy Atufunwa and Keidy Candelaria were a major source of points in this match.

Atufunwa opened the game with a tap over the offensive line and a block immediately after. She had two hard spikes in the middle of the Charger scoring run to put SCSU out of set 1, and opened set 2 winning a battle at the net for the ball. She would add to that by smacking a close range attack off the Owl defense, and later using a lighter touch in the middle stages. Late in the set she had two consecutive kills one, was just putting the ball over from close range, the other, a blast. She also had the distinction of opening up the third set with the opening point as well, and continued to strike with authority including a missile blasted down the line. With the score tied she sent a furious spike over the net to start off the decisive scoring run. And she would pummel the ball down for the team’s second to last point of the game as well.

Candelaria played a crucial role in the the major UNH scoring run of the first set by tapping the ball over the front defensive line, then on the next play she threaded a spike through the Owls, and then even she stepped back and served up an ace. Later in the set she spiked the ball with precision just within the back line of the SCSU zone, she also ended set 1 with a spike as well. Midway through set 2 she landed another cross court kill just within play, and followed it with a lighter kill off a defender to the floor. She struck again later with an absolutely smash off a defender’s hands on it’s way out of play, and she ended set 2 as well by truly hammering the ball through the blocking line. Early in set 3 she was a major part of the point scoring including a light hit into a middle gap, as well as two spikes with greater force. She would cap that off launching a fast kill down the line very late.

Amber Dalton, Kaulana Ane, and Kristen Lee had many of the other kills.

This included Lee having a pair of early points one involving a whap that went unreturned, and later she served up an ace that sailed off a player and out of bounds as well. She would also whack an attack off the blocking line late in the game.

Ane played a key role in breaking the tie in set 1 including using a set to place the ball amidst the Owls with none being able to return it, she also used force whamming a ball off a player on it’s way out of play. In set 2 she helped build a lead with a wallop that also rebounded off a defender and out, and she turned to receive the ball and whacked it over as well not long after. Late in set 3, she had a put down at the net, and had the distinction of ending the game with a huge spike of the ball.

When Dalton launched an attack midway through set 1, it actually hit a SCSU dig flew up, hit the ceiling and slammed back into the floor, later she spiked it through the block diagonally. In set 2 she also came up with two kills during their lead building, though in set 3, she helped keep the decisive scoring run moving with both a put over at the net, and then a block to shut down an Owl attack.

Statistically, in addition to her offense Ane had 39 assists, the libero Kea-Marie Olaso had 17 digs. The team only had 4 blocks on the day but Dalton had 2 of them solo. Margo Meteyer had 2 service aces on the day in addition to Candelaria’s, Olaso’s, and Lee’s. Olaso had had some key saves during the game diving all over the place to keep the ball in play, on one her play out of bounds set up an eventual point.

For Southern Connecticut, the major offensive force was Sarah Beres who had 11 kills on the day, and she did it in multiple ways, knocking multiple kills off the blockers, using a lighter touch but not getting a return, getting a set from Kimberly Lachowicz and blasting it straight and over, stuffing a UNH attack early in set 2, powering another kill through a blocking line in later, and several other spikes to various places in the UNH zone throughout. Syriah Celstine, Jade Black, and Olivia Lathrop picked up most of the other kills. Celestine destroyed an errant New Haven pass early in set 2, and in addition to a straight up spike, won a joust at the net battling a Charger for the ball. Black had some decisive kills including one that was sent right to the center of the defense’s zone to great effect. She also picked up a variety of digs on the day including several to blunt attacks by UNH’s power hitters.

Statistically, Lachowicz had 20 assists, Black had 12 digs, the libero Vanessa Sullivan had 9, Celestine and Beres each had a solo block, and there were no service aces.