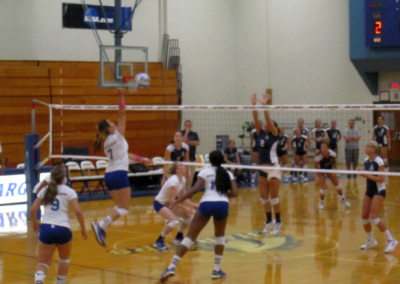 WEST HAVEN, CT- In a Northeast 10 match up the Saint Anselm Hawks came down from New Hampshire to face off with the New Haven Chargers in the Charger Gymnasium Tuesday Night. With the UNH pep band in the house, UNH took the win in 3 straight sets 25-14, 25-10, and 25-21.

UNH spent much of the day on the attack. The opening set opened with Amber Cannady running to position herself, lifting off and unleashing a spike. Keidy Candelaria, who would be on fire throughout the match blasted the ball down the line, and followed that with another spike down the line as well. She and Kristy Atufunwa then shared a block, before two points later she sent a cross court kill to the gap. Not long after Kaulana Ane came up with a defensive save to keep the ball in play and Atufunwa eventually sent it over to not be returned. Kristen Lee had two straight kills including one that ended a long back and forth. Saint Anselm came back, but Atufunwa typhooned a kill in to start a long run, where Amber Cannady picked up a block, Margo Meteyer served up three aces, including one in which the ball skimmed off a player’s hands on its way out of bounds. Cannady and Ashley Dalton blocked a ball right back at the Hawk who attacked. After Saint Anselm stopped the run Lee and Cannady picked up a kill placing the ball into the back court. Not long after Ane broke from the traditional setting role, spun to receive a dig and spiked it over hard with success. Candelaria got back in on the scoring late when she used a light touch to float the ball over the defense front line. Two points later however she received a set and crushed the ball over the net. Dalton and Lee continued the march towards a set win, and it was Cannady who spiked with authority sending the ball onto the blockers and straight down to win the set. Saint Anselm’s Kyla Gustavson, Vivian Fitzgerald, and Holland McNabb had much of the scoring in the set for their squad.

Set 2 opened with a 14 to 2 run for UNH which basically took care of the set right there. Cannady picked up two straight kills then teamed with Ane on a block. Candelaria set the ball over the block and the back defenders couldn’t reach it. She then had two straight spikes in. Cannady landed a kill in the middle of the Saint Anselm back court. Ane stepped up to serve later and it sailed off a defender’s attempt to set it and to the ground. Atufunwa and Dalton each whammed their attacks into a corner. Saint Anselm put up a little run to stop the bleeding but Candelaria had a truly massive kill which ricocheted off a defender to stop that comeback. In the later moments, Cannady fought a battle at the net with the Hawks blockers and eventually put it down, later she would receive a set and hammer it across as well. Hayley Wilson and Meteyer each picked up a service ace, with Meteyer’s serve bouncing off a Hawk’s hand and rocketing into the bleachers. Candelaria used a lighter touch again, and a series of attack errors iced it for the Chargers.

During this time Saint Anselm’s Margaret Tereschuk had some good digs and would stop several Candelaria attacks as the game progressed. She also picked up two points herself including a set to the back of the UNH defensive zone and a backwards dig to keep the ball in play that flummoxed the Chargers and dropped in. Offensively, Fitzgerald, Kylie Kozlowski were among the point scorers.

Despite Sets 1 and 2 being pretty one sided, Saint Anselm battled the Chargers hard in set 3 and nearly caused a fourth set. Early on it looked as if UNH was going to make short work of this set as well. Of the seven points the Chargers scored early, Candelaria had three of them of varying velocities. Kea-Marie Olaso added a service ace to her team’s growing total. Atufunwa had two smashes early as well. Cannady received a set and kabonged it off the defenders as well. Damianis Eusebio got on the board with a spike, and Ane scored her second kill when her attack rocketed into the Saint Anselm zone with great effect. Saint Anselm climbed back to within 3 points thanks in part to Gustavson, a block from Lauren Oxley and Melissa Ouellet, and a hard kill from Oxley. Candelaria struck hard with such force the crowd reacted with pure awe. Eusebio added her second kill of the match, and Cannady absolutely destroyed a kill as well thanks to a good set. Saint Anselm was in pursuit though. Candelaria and Cannady both came up with spikes and Dalton’s blocked ball was not returned.

Oxley was dangerous for the Hawks though and she had a block, a kill and then another block in short order to help bring the score to 20-19. Wilson’s lone kill of the game extended the UNH lead to 2 and a Hawks attack error increased their deficit, but Gustavson skimmed her kill off the blockers, and over to cut the lead again. Lee hammered her spike off the blockers and the lead was three, but the teams had some attack errors, and Shannon Douglas attacked for the Hawks to cut the lead again.
With the game on the line Lee’s spike took away the doubt as it hit a player and went sideways out of play.

Statistically (source: New Haven Athletics), the Chargers were led in Kills by Candelaria who posted a .370 kill percentage as well. Cannady had 11 kills and a .529 kill percentage. Lee had 6 and Atufunwa 5. Ane had 37 assists in addition to her 2 kills. Meteyer was responsible for 4 of the team’s 7 service aces. Dalton had the team’s only solo block of the game with others sharing 3 others.

For the Hawks of Saint Anselm, Fitzgerald led the team with 5 kills, and Gustavson and Oxley had 4. Natalie Steinwart had 17 assists on the day. The team had only one service ace. Tereschuk had 15 digs in the match and Ouellet and Oxley each had 3 shared blocks.