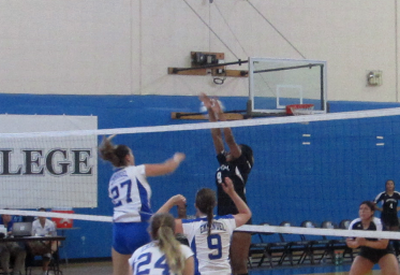 NEW HAVEN, CT- Fresh off a victory over Albertus Magnus, the Emmanuel Saints took on the Mitchell Mariners and in a hard fought match won 3 to 1, but not without a determined effort from the red and black.

Set 1 was a pretty close back and forth until the end when Mitchell got out to a big enough lead to close it out 25-22. Set 2 went Emmanuel’s way fairly quickly and they built a lead and held it though Mitchell came back, still it was 25-22 in the favor of the Saints. Set 3 was close, but the Saints took a lead late and Mitchell couldn’t pursue fast enough for another 25-22 win. In Set 4 Emmanuel kept pulling out to leads and Mitchell would close, but in the end a 25-20 win put the Saints over the top set and match.

Statistically (source: Mitchell Athletics) Sarah Colby led the Saints with 11 kills and a .258 kill ratio. Danielle Rose had 10 kills, with Brittany Tutalo ad Moriah Logan adding 6 each. Shannon Dudley had 24 assists. Cara Callahan and Tutalo each had 3 service aces among the team’s 11. Yun-Ting Lee had 18 digs, and Dudley and Callahan each had 16. There were only two blocks shared by four different players.

For Mitchell, Gloria Charles, Amanda Garcia, and Jaclyn Tempkins each had 7 kills. Nicole Terni had 27 assists. Arianna Thomas, and Terni each had 3 service aces. Charles had 19 digs for the team, Thomas had 15. Garcia had 4 solo blocks, as part of the 8 total the team had.

It had been Terni that for Mitchell opened up set 1 with a service ace, Garcia had two of her blocks in the 1st set, and Thomas had a kill that set up her serving only to have serve up an ace following a kill by Garcia, who would add another later on. Kendra Erskine contributed late in set 1, though two more kills from Garcia as well as a spike down the line by Terni helped get the Mariners close to victory in set 1. In Set 2 Charles picked up kills and blocks throughout the 1st half of the set, and Tempkins came up with two huge kills, one cross court, and one that the defender couldn’t set up a dig for. Points later, Garcia was given an errant opposing pass to wallop back, which she did. Tempkins would add a late service ace, but it was too late as the set was soon over.

Set 3 found Tempkins with two early kills, and Thomas served up an ace just in bounds to the defense didn’t try to get to it. Erskine, Kaisea Caramante, the defensive libero, came up with a dig that went over the net but the defense couldn’t set up. Charles, Thomas, and Terni would continue to score points including Tern’s late service ace. Set 4 featured two blocks from Garcia and Thomas, and Charles added to their totals in the losing effort.

Emmanuel’s scoring in set 1 was largely opened by Clare Bucci, and followed by Rose and Colby striking several times. Colby would add a block later, and Logan found a gap to put the ball into. Tutalo and Rose would share a block later in the set after Colby kept the ball going in the rally. Tutalo, Campbell, and Logan would add to the kills, and Campbell would use a set to send the ball into a back corner where Mitchell wasn’t for one of the team’s final points. In set 2 Logan’s service ace was an early highlight but Colby and Tutalo scored early. The team’s major scoring run to take the lead from Mitchell was started when Tutalo went on the attack, a few Mitchell errors later, Durkee slammed the ball off a blocker and sent it sideways out of play. Following a Mitchell time out, two Colby kills, and a Callahan service ace made the lead even larger. Late in the set Logan kept the lead growing as well with two straight spikes.

Set 3 featured Rose being responsible for 5 of her team’s points in a row (broken up by Mitchell scoring) including one that rebounded off a defender and flew skyward towards the gym’s balcony. Later on Durkee hurricaned an attack off a Mitchell player and into the far wall of the gym. She served up an Ace soon afterward during another big Emmanuel scoring run. Rose struck again and Dudley added an ace. Colby would score the team’s two last points including a huge blast to close out the set.

Set 4 opened with Callahan’s service ace off a defender and into the bleachers. Colby had another kill and Tutalo added another service ace. By this time the lead was very strong. Rose, Tutalo and Durkee just kept doing what they do, and Tutalo would serve up another ace in the late stages. Durkee closed out the set with a service ace and a kill in short order and the dangerous Rose took the set and match with a spike to stop any chance of a comeback.