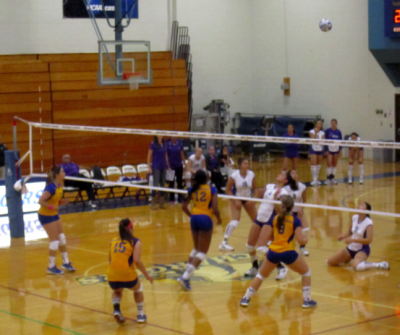 WEST HAVEN, CT- The University of Bridgeport Purple Knights didn’t have to travel far to find a tough opponent in the University of New Haven Chargers, and before a good crowd at Charger Gymnasium, the yellow and blue defeated the dangerous Knights in 3 sets.

The Chargers took control of set 1 and didn’t let up. It was close early but at the 7 to 5 mark, UNH went on a 7 to 2 run to put UB into serious trouble and the visitors would be held at a similar deficit through the rest of the set until it was wrapped up 25-18.

The set opened with Kristen Lee picking up the first of what would be 14 kills, Amber Cannady joined in with a block and a kill, as Keidy Candelaria and Kristy Atufunwa provided offense as well, and Ashley Dalton picked up a block. Bai Zhang picked up a service ace in the middle of the major UNH run of the set as well. Cannady and Candelaria shared a block late, as well as picked up individual kills, and Atufunwa teed up a cross court blast into a corner to keep the lead. Lee would strike again in the later stages including a kill off the defender’s hands and out of play to end the set.

Some of Bridgeport’s bright spots in the match included Ying Shen and Biljana Savic picking up kills, as well as Darsel Springer and Larissa Oliveira’s tandem block as well.

Set 2 was a much closer battle throughout as the two teams fought to a 15-15 tie midway through. New Haven had taken an early 5-0 lead thanks in part to a block from Kaulana Ane, an Ace from Kea-Marie Olaso, and more kills from Cannady and Lee. Bridgeport finally broke the run and managed to close a bit off a Michele Santos ace. Lee picked up two more kills,and Candelaria added to her totals to extend the lead again, but Bridgeport would pick up four service aces during a run to tie things up courtesy of Oliveira and Fernanda Silva who each picked up 2. Savic and Sabrina Simas added kills as well.

The two teams continued to go at it with Lee, Cannady providing some of the points on UNH, and Springer, Oliveria, and another service ace from Santos balancing things for UB. The Chargers pulled away soon after as Atufunwa battled at the net with a Knight and sent it off the blockers, Candelaria added a service ace, and Dalton and Atufunwa added to the lead, before Lee sent a spike into the back gap of the UB defense to take the set 25-20 Thoughout this Shen and Savic kept attacking hard to keep UB in striking distance.

The Chargers came out swinging in Set 3 and closed the door on the set and match fairly decisively reaching a 11-6 lead and holding UB to only 2 more points until the 22-8 mark of the set. The set would eventually end with a 25-11 win for the home team. Amidst this Cannady, Candelaria, Atufunwa, and Lee all kept up the attack spiking hard and effectively, with a few blocks mixed in. Margo Meteyer picked up two service aces in the run that really sealed the deal as well. UB’s Oliveira, Shen, and Simas picked up several of UB’s points in their fight to stay alive.

Statistically (source: UNH Sports Information), Lee’s 14 kills lead the Chargers as did her .522 kill percentage. Cannady’s 10 kills was second, Candelaria was third with 6. The team picked up 5 service aces on the day and Cannady played a role in 6 blocks of the team total of 8. Olaso, the libero led the team with 15 digs and Candelaria added 12. Ane picked up 29 assists.

For UB, Oliveira’s .556 kill percentage was tops among her team, and she had 6 kills, though Shen led the team with 9. Silva had 16 assists on the day, as she and Oliveira each had 2 aces out of the 6 total the team put up. Libero Taylor McBeth had 11 digs, and Simas and Springer each had 3 shared blocks out of the team total of 4 (all shared.)

Coach Leo Uzcategui’s Knights dropped to 6-2, and the UNH squad of Coach Robin Salters rose to 5-1 after the contest.