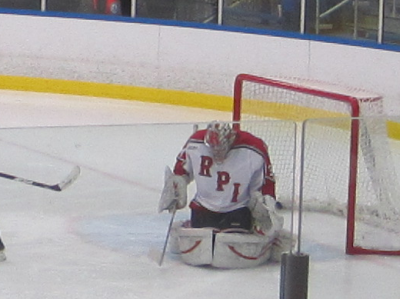 The puck slips past the keeper off a face off during UML vs. RPI

STORRS, CT- In the opening game of the Toyota UConn Hockey Classic the RPI Engineers of the ECAC took on the UMass Lowell River Hawks from Hockey East. In goal for RPI, Scott Diebold, and for UML, Doug Carr.

The scoring began quickly when Joseph Pendenza scored 43 seconds into the game assisted by Matt Ferreira and Josh Holmstrom. Each team had a player in the penalty box in the period, though during a UML power play, an errant shot went flying over the net and the protective netting smashing into UConn’s 2000 MAAC title banner and slipping behind that wall’s scoreboard, disabling it. At 11:01 UML’s Stephen Buco scored assisted by William Eiserman and David Vallorani. Another River Hawk went in the box at 12:06, however this didn’t prevent the speedy Vallorani from sweeping in for a short handed goal at at 13:38 assisted by Riley Wetmore and Chad Ruhwedel. Each side would pick up an offsetting penalty, and later RPI gave UML a power play late but that was the extent of the scoring in period 1.

In period 2, a Lowell penalty put RPI on the power play, and they succeeded with Ryan Haggerty picking up the goal assisted by C.J. Lee and Brock Higgs. UML however answered that goal with 2 more of their own including Scott Wilson’s unassisted goal 30 seconds after RPI, and Michael Budd’s goal at 10:50 assisted by Vallorani. A River Hawks penalty at the end of the period put RPI on the power play starting period 3, but they were down 5-1.

Period 3 opened with UML killing the penalty, and at 3:21 Terrence Wallin scored right off a face off assisted by Ferreira in a goal that surprised the goaltender, his defense, and the fans. RPI notched another late goal scored by Zach Schroeder. Very late in the game RPI was called for a penalty, and UML added another goal thanks to Joseph Pendenza assisted by Malcolm Lyles, and Stephen Buco at 19:50.

Based on eyewitness account verified against official box score.