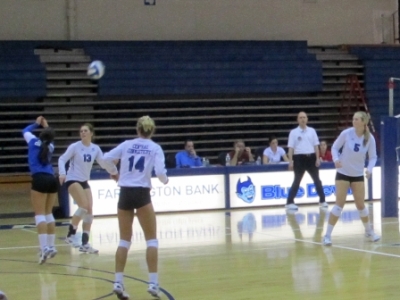 NEW BRITAIN, CT- The Central Connecticut Blue Devils hosted the Holy Cross Crusaders Wednesday night in Detrick Gymnasium in a non conference affair. The purple clad visitors made it a fight but in the end CCSU took a 3 set win.

The scoring began when Jennifer Waddill received a set from CCSU Setter Danielle Gasser and knocked it in for a kill, 2 more points would follow and CCSU was building a lead. Cross picked up two points including a kill from Alicia Swearingen, but this time Gasser set the ball up for Sara DeLacey who smashed it home. Kathleen Colpoys returned fire for the Crusaders with a whap off a defender and out of bounds, though CCSU’s lead would increase to 6-3 due to some of HC miscues.

The two teams traded some points with Swearingen picking up another kill, a Blue Devil smash in response, a block from HC’s Callie Black, and a kill from her teammate the ever dangerous Megan Lynch. Swearingen tied the game 7-7 with a service ace.

CCSU however started an offensive run pulling out to a 15-10 with both teams benefiting from a variety of attack and ball handling errors. Following this a fury of big kills followed from both sides as Swearingen struck again, Colpoys sent a ball into the corner, Swearingen then smacked a ball off two defenders to cut the lead to 2. DeLacey however completely hammered an attack from the net over, only to have Swearingen use a light touch to send the ball into a gap. Jamie Rademacher’s kill responded for the Blue Devils however, and Blaike King unleashed a rocket into the purple zone following that. One attack error later and it was 19-14. Once again Swearingen added to her kill total with a massive spike, but Central kept pace with 4 more points including another Rademacher attack. Lynch got in on the scoring again with a spike off the block, and then a service ace.

Following a good defensive dig by Brittany Schumacher, Rademacher struck again typhooning the ball in for a 24-17 score. Holy Cross held off the loss with another point, and an intensely long rally back and forth ensued, with neither team giving ground until finally an error ended it 25-18 for CCSU.

Set 2 would feature Central getting out to an early lead as well of 9-5, thanks in part to Cochran’s kill through the blockers, a kill from Waddill, a shared block between her and DeLacey, a great defensive save by Cochran eventually leading to a smash from DeLacey, a big kill off a blocker by Rademacher, and then another point from her when she won a joust at the net. Holy Cross however stayed with things after a starting the set with a block from Hannah Grace Stokes and Colpoys (who had a solo block right after.), Layne Hubbard tipped the ball in for a point, and Colpoys added her third block for the set. Lynch unleashed a cross court kill, and Stokes and Black shared a block, before Swearingen picked up a service ace, to cut the lead to 9-8.

Rademacher cut off the comeback when she ran up, leapt and spiked the ball over the net. Lynch’s answer was a kill through the blockers, and the two teams kept trading points with Central keeping at least a one point lead until things broke open as DeLacey pounded a gigantic kill from the net over, and 2 more points would follow. The score was 16-12.

Holy Cross climbed back into it in part due to Swearingen and Black sharing a block, though King added another kill only to have Swearingen strike yet again with a rocket blast. Rademacher tipped a ball off two Crusaders and to the ground to keep the lead at 3, though Lynch teed up another kill, and after Rademacher responded, Lynch picked up another. The two teams traded points again, but Central picked up a 4 point lead after King successfully attacked. Swearingen lanced an attack through a CCSU block to cut the lead again, but King’s kill sailed off a defender and far far out of play. It was set point, 24-20, but the Crusaders fought back, including a kill from Lynch to bring about 24-23. Central however sealed the deal the point after. 25-23.

On to set 3, the Blue Devils had edged the Crusaders so far, but the match would not be there’s without a 3rd set. Things opened auspiciously for the home team as they came back from an 0-2 deficit, thanks to a Waddill block, DeLacey receiving a Gasser set and dropping the hammer, and King adding to her scoring totals. Lynch was responsible for a few of the HC points as they attempted to keep pace, but ti was soon 16-9. Other CCSU points included Gasser and Rademacher sharing a block, and later Gasser preparing a fake set but tipping it over the net, Cochran launched a kill off the blockers, and even the Libero Schumacher added a kill when her return from back court hit the floor of the back HC zone, another kill from Cochran and a shared Waddill and DeLacey kill were also part of the scoring

Lynch blunted the scoring run again with a ball poked to the gap, but CCSU’s Cochran and King each had a kill to make the situation even more dire for the Crusaders. By the time DeLacey uncorked a tremendous thrashing of the ball into opposing territory the score was 19-11.

The Crusaders charged back as Hubbard picked up a kill, Colpoys and Stokes shared a block, Lynch whapped another attack in, and later Colpoys added another successful tip. The score became 19-18, though Cochran would end the unanswered run with another kill. Stokes and Colpoys used a block to the cut the lead again. The run had basically ended though as Central pulled ahead 24-21. Cochran, Waddill, and DeLacey each had kills in this time, and it would be King who ended set and match, 25-21.

Looking at the statistics from the match provided by the CCSU website: Cochran ended the night with 12 kills, King 11, DeLacey 10, and Rademacher 10, though Rademacher had fewer attack errors, and DeLacey had none out of 11 attempts for a .909 hitting percentage. Gasser the setter had 43 assists and also 3.5 points of her own on the night. Schumacher had 22 digs. Waddill had 4 blocks and DeLacey 3. King also had 12 digs, Amalia Ashley 11, and Cochran 10.

For Holy Cross Lynch earned 15 of the team’s points but on 39 attempts and 6 attack errors. Swearingen had 10 points including 7 kills, 2 errors, on 14 attempts. Stokes had 26 assists. The Libero, Elizabeth Watters had 10 digs, Lynch had 13, and Swearingen 9. Stokes had 5 blocks, Colpoys 4, and Black 3.

Editor’s Note: This is based on notes taken at the match, normally verified against the official play by play if possible. Reports focus on offense since it is easier to track but note defensive play whenever possible. It is difficult to note things like digs and assists although they are no doubt vital to the game.  Also, a lot happens in a volleyball game, far more than can fit into a report, so this just notes some of it.