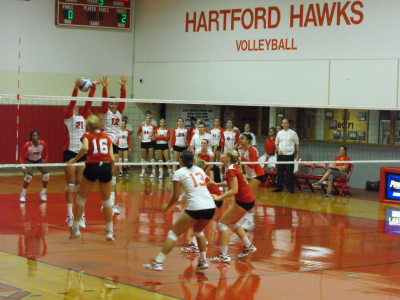 WEST HARTFORD, CT- The Hartford Hawks hosted their second home game in as many days as the Sacred Heart Pioneers came up from Bridgeport for a Thursday night clash. It would be a close one in sets 1 and 2, but SHU would put the match away in set 3. 25-16, 25-21, 25-13. In may respects the match was closer than the score indicated.

The Pioneers pulled out to an early lead in seat 1 and never let it go on their way to a 25-16 set win, but it was not as if the Hawks didn’t give it a fight. Highlights for the pioneers included Dianis Mercado’s kill early on, (one of many of hers on the day), Christina Bauch had a good save not long after, Ashlyn Trimble whacked a ball of the blockers, and added another kill right afterward, she would also hammer an attack off the blocking Hawks not long after that, and Bauch added a kill just in bounds, Elise Sage then received a seat and spiked a kill, Bauch’s service ace would follow, and Mercado picked up another kill not long after. The two teams exchanged points, but Trimble sent a ball over so hard it hit a defender and slammed into the wall of the arena. A Hartford Time out would follow. Johanna Ovsenek got in on the scoring when her missile was launched and flew off a defender and out, Trimble used a light touch on an attack, and Bauch landed another kill just inside the lines a few points after, Sage then uncorked a blast and teamed with Courtney Kidd-Kadlubek on a block, as the match progressed Sage struck again with a kill just in bounds, on a long rally Trimble had a good defensive save before a teammate finally ended the back and forth, Ovsenek crushed another rball, and hit a second kill off the defenders, before Trimble placed a kill just in bounds to win the set.

For the home team, their first set highlights included Dionna Kirton opening up the U of H scoring with a whap off the defenders, Michelle Cordell had an early service ace, on the ensuing play, libero Danielle Etta had one of her many good defensive saves, a few points beyond that, Sydney Scott smashed a kill from the net, and Kirton popped a kill off the defense to the floor behind them, Cordell then picked up a spike kill, and Kami Nethersole tapped the ball in front of the defenders, and not long after launched a kill which bounced off a Pioneer and out of play, later Lindsay Makowicki walloped a kill over, and on the ensuing play, Cordell had a great save literally going out of bounds to keep the ball in play, She also ended an SHU scoring run with another kill, and Lindsay Ford had a major save during a very long rally, though the Hawks picked up very few additional points in the set.

Set 2 was a battle royale to a 25-21, SHU win. Hartford kept with them as the points trading was far more even. Highlights for Sacred Heart include Sage crushing the ball in, Mercado’s cross court spike, Trimble sending the ball off blockers and out of play, a good diving save by Mercado during a long rally that eventually resulted in Sacred Heart getting the points, and on the next long rally Bauch had a good save as well, Sage received a set and blasted it in, then for another point used a tip, Mercado unleashed a furious missile down the line, and Sage sent a kill to a gap in back courtt, later she had a smash followed, by Mercado hurricaning a ball through the blockers, Kidd-Kadlubek served up an ace to build the SHU lead, andMercadoo struck again, Ovsenek was next with a kill, late in the set Bauch crushed an attack into the Hartford zone, after the Hawks took a lead Sage broke their scoring run with a kill, on the next play Jessica Colberg had a good dig during a play that eventually resulted in Sage sending the ball off numerous defenders before it hit the floor, Mercado then tapped a ball over the front line, and and two points later the set was in the books.

Hartford’s highlights in the set included Nethersole’s kill to open the set, a big spike from Cordell, Nethersole’s block, Scott’s tip in attack, a good dig by ford during a long rally, and Makowicki ended another long rally with a hammered shot, Cordell later served up an Ace midway through, Scott broke up a Sacred Heart scoring run with her kill, and later Kirton’s kill hit a defender and flew out, the next play Etta came up with a diving save, and not long after Nethersole dived to keep the ball in play and Scott would deliver the kill. Ford’s turning put over tied the set at 20, and Kirton served up an Ace to take a brief lead for the Hawks, later Ford would have great saves including a dive across the court, though the Pioneers were rolling to the set win.

In Set 3, Sacred Heart gained the momentum and took the set quickly, their highlights included Bauch’s early service ace, and later her kill ending a long rally, Mercado typhooned an attack in, Kelsey Freeman tapped the ball off the blockers, Trimble launched a blast, and later came up with another kill, Mercado crushed an attack, and then followed it immeediately with another kill sliced through the block, Bauch struck soon after, and added a cross court kill after a time out, Sage whammed it, and Bauch came up with the service ace, it wasn’t long before Sage attacked with success, and Kidd-Kadlubek added a service ace, Freeman pounced on an overpass and knocked it in and shared a block with Trimble, Kidd-Kadlubek had a good save, which eventually ended in a teammate nailing the kill, Bauch crushed another attack late, and it was soon Sacred Heart’s set.

Hartford’s highlights included Cordell crushing a spike over, a good save by Kirton soon afterward, Ford winning a joust at the net, Makowicki landing a kill just in bounds, Kirton’s kill which hit a defender and then flew sideways out, another good save by Etta, Scott whapped the ball off the touch, Cordell served up another Ace on the day, Ford had another key save during a long rally, one of her many, Etta and Kirton had good defensive plays late, and Kirton scored the team’s last point with her service ace.