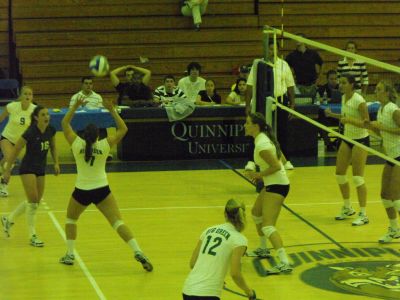 Rather than going set by set, here are some general highlights for both teams.

For Dartmouth, they essentially fended off an opening St. Peter’s lead and never looked back the entire match. Madeline Baird was on fire and had a large amount of kills, including both massive spikes and several tactical taps in. Annie Villanueva also came up with a bunch of critical hard smashes. Along with Cooney, and Elissa Scudder, they also picked up several key blocks to stifle the Peahen offense. Kelsey Johnson served up a few aces, and Kendall Johnson got in on some blocks and kills. Libero Amber Bryant also had her share of defensive plays as well. This set also featured Dartmouth attacking, and the ball ending up rolling along the entire length of the net and hitting the antenna for a Big Green point since it was on the St. Peter’s side, a rare event indeed.

For St. Peter’s there was plenty of offense and defense as well. Mendoza kept up with her attacks. Haynes and Rost shared more blocks. Phillips hit some strategic kills as well. Flores picked up an Ace in set 3 as well.

St. Peter’s would fall to 4-6 on the Season, and Dartmouth picked up 3 more wins for their record.