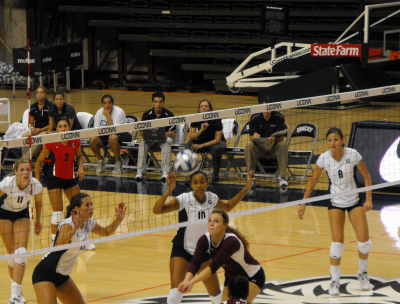 STORRS, CT- In last year’s finale of the UConn Toyota Classic, UConn and TCU went to five sets and then some before the Horned Frogs put the Huskies away. This year the visiting SIU Salukis would take the win over the Huskies in three straight sets to win the Classic title and finish the tournament not having lost one set.

As always with recaps I tend to focus on the offensive, as it is hard enough to follow the fast paced action, but this is not to in any way downgrade the importance of key sets and key defensive plays. I do note defensive saves whenever I have time to write them down.

Set 1 was a close one but SIU took the win 25-20. Highlights for the Salukis included Alicia Johnson’s kill to open things up and Rachael Brown’s service ace which narrowly landed in bounds. Elly Braaten picked up a kill of the block of the defense. As UConn had pulled out to a lead, SIU responded with a kill from Jennifer Berwanger, Jasmine Conner absolutely stuffing the Huskies with a block, a combined Berwanger and Conner block, and a service ace from Alysia Mayes. With the Salukis now pulling out to a lead, Berwanger delivered a huge smash, followed by Johnson’s kill soon after, and two straight Aces from Bailey Yeager. Brown and Mayes also came up with key defensive saves on the way to another point. Johnson delivered a kill, and Sydney Clark’s smash put them within one before they picked up their set winning point.

The Huskies had their moments too including a Jordan Kirk kill early on, and three successive service Aces from Morgan Freeman. Allison Nickel picked up a block, and later Kirk had a service ace. Murray delivered a thwapped kill in and later Freeman picked up a block to add to her point total.

Set 2 was close as well, but eventually SIU pulled away just enough to score the 25-18 set win. For SIU scoring started off with Johnson and Conner combing on a block, Berwanger struck again, as did Scott with a tip over, and Yeager serving up yet another Ace. Later Johnson had another block of her own, and a kill just in bounds. Clark let loose a blast as well, and Johnson got back in on the scoring, and also teamed with Conner for another block. Clark had another big spike later on, and Johnson picked up a couple more, Clark had another kill, and Yeager served up another Ace. Clark hit a couple more kills on the way to the SIU set win.

For the Huskies, some of their highlights included a Murray kill, as well as Cayla Broadwater and Nickel sharing a block. Broadwater picked up another kill, and later Freeman just hammered the ball in for a kill. Kirk and Broadwater hit successive kills as the set progressed. Quayle sent a kill through the block. Freeman than tipped a ball in, and Murray followed with a kill right after. After an SIU run, Freeman struck again. On an ensuing rally, Quayle and Broadwater both good saves but Brown picked up the point. Later on Freeman would get UConn’s last point of the set.

After the two closer sets though, SIU would pick up a 25 to 13 win in set number 3. The Salukis highlights included Berwanger and Conner’s dual block, a HUGE spike from Johnson, and later another kill, later Clark added a tap over, and a kill past the defenders. Johnson picked up another point. Following a great save by Yeager, Mayes hit the ball home. Johnson got on the board again, followed by a Mayes block, and it wasn’t long before Berwanger hit the kill in. Brown served an Ace just in bounds, and then another close to the end. Berwanger tapped the ball over and a Jessica Whitehead block ended the set and match.

For the Huskies, Kirk picked up a kill off the block and then two more points in short order. Nickel smashed the ball into the corner, and teamed with Julia Hamer on a block. The Huskies benefited from several SIU errors, but in the end it was the Salukis that took the win.

SIU can return home victorious, while the Huskies suffered their first defeat of the season. UConn doesn’t return to Gampel until September 24th.